The previous night I rolled into Furnace Creek and it was 90+ degrees.  Furnace Creek is 200 feet below sea level, and the air feels thick and hot.

Original plan called for camping (when the forecast was only 81!) but I quickly vetoed that and got a ridiculously over priced hotel room, which was worth every penny!  They also accommodated my desire for a late checkout if I had any incidents out on the road.  Once again I was a spectacle in the parking lot, with a dozen people taking pictures of me and my crazy motorcycle-bicycle rig.

Dante’s was the ride I planned on rolling out before dawn due to the heat (and later I would hear this day was an all-time record high of 99F, beating the previous record set in 1948) so before leaving I acquired a small, rechargeable 350 watt headlamp – a NiteRider Swift 350 (Amazon).  I have a bunch of different headlights, but I wanted something light weight and reasonable enough to use for an hour or so before the sun comes up.  When I did Mauna Kea to the visitor center, I used a TINY 20 or 30 lumen lamp, and nearly crashed when the shoulder ended suddenly.  Lesson learned!

I rolled out a little before 6 AM, straight into a nice head wind.  The grade here is pretty minimal (2-3%) – so you’re really just churning along in the dark.  Once out on the road, you immediately get smacked by the heat radiating off the ground.  Even in total darkness, it felt like 80+ degrees.

An hour and a half of the valley floor, you make the turn to Dante’s, this was right around when the sun was coming up:

I was basically staying ahead of the rising temperature, so it was a pleasant ~68 degrees the entire ride.

Here’s the view looking up to the final set of switchbacks up to the summit.

Here’s where my 30-42 gearing pays off – I was pretty tired after all the riding (both cycling and motorcycle) but cruised on up to the top.  There was no one at the summit to take my picture, hence the Shadow Selfie. 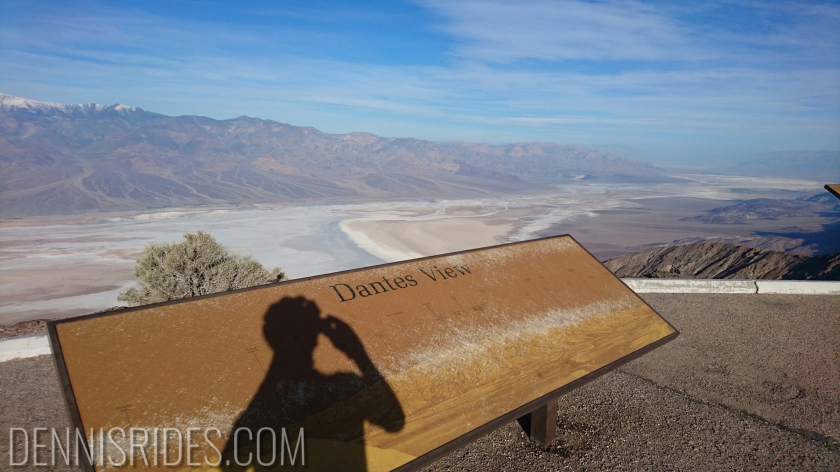 Dowwwwwwwn we go – this is a pretty fun descent, past the 15% stuff, no need to really use much brakes at all.  Just tuck and haul on down.  At the turn off, I met 2 other cyclists pedaling up.  Dante’s is definitely a popular climb (for Death Valley) since it conveniently starts at the Furnace Creek resort area.

Some time during the descent, my Stages power meter ran out of juice.  My poor preparation struck here – it was well over 1700 miles on that battery.  Oops.  So some of my training load & kJ power is incorrect for this ride.

I rolled back into Furnace Creek and took a shot of my GPS showing 195 feet below sea level.

Scarfed some food and drank a bunch of fluids, showered and loaded up the motorcycle (once again gathering a crowd!) and headed back to Kernville – 185 miles away, with 3 Death Valley climbs in the bag!